A friend of mine just wrote and told me that she was "Googling" important words such as "Quaker," "Easter," and "Silence" and came across my blog post about "Chocolate Crosses." She revealed that she enjoyed tacky religious stuff as much as I did -- and cherished her pack of "Atone-mints."

I began thinking of other tacky religious things I liked -- and the ones which give me pause. The ones I like are the ones that are parodies -- like the "Wash Away Your Sins" personal hygiene line or "Convert to Judaism Breath Spray ("Access over 4000 years of Jewish doctrine with a single spritz of the tongue!"). I gave that last one to my little rabbi brother Aaron -- he said he'd use it when mixed faith couples came to him to be married. No messy conversion needed any more!

Still, the real stuff -- the serious Jesus junk -- is funnier and sadder at the same time. I mean, "What would Jesus do" if he walked into a store and saw this stuff? Armor of God PJs? The Jesus Pan ("Put the image of Jesus RIGHT ON FOOD!") Gone to See Dad t-shirt? Would Jesus laugh -- or cry?

But just when I think we Christians have a corner on truly tasteless religious stuff, Aaron sends me some Jewish junk. Which just makes me wonder all the more -- is religious tackiness just part of the much talked about Judeo-Christian tradition? Do Muslims have really schmaltzy stuff? Or Hindus? Or Buddhists? Or even Wiccans?

As usual, I don't have any answers. Just questions. I do have to wonder, is this -- any of this, from worship to Jesus junk -- anything remotely like He had in mind? My guess is we're sorta, kinda, maybe close on worship -- and pretty far away on the holy hardware side of things.

Now I know I'm out of step with many folks feelings, but I do place Jesus' words "Love your enemies, do good to those who hate you" above false patriotism's words "Love your country -- right or wrong." And when I saw this brief video I was reminded both of the cost of war and the potential for good that could be accomplished were our government (of a nation that many still want to hold up as a "Christian nation") to redirect those funds towards peace. Would to God that would happen.

Mr. Bean and the Love of God

Having just returned from vacation, Nancy and I picked a movie about vacations to watch the other night. It starred Rowan Atchinson as the hapless Mr. Bean -- someone Nancy introduced to me after discovering his comedy whilst flying over and back across the Atlantic ten years ago on her Grecian vacation.

This film is the usual combination of Bean -- very little dialogue on Atkinson's part ("Bean," is one of the few words he speaks, in his low, deep in his throat voice) and lots of sight gags. Poor Bean, the uptight Englishman in his brown shoes, brown pants, brown tweed jacket and white shirt, often gets into self-made messes, but just as often causes messes behind him of which he is rarely aware. It's a scream (I think) in the same way that the old-time silent comedies were.

The poor guy is so clueless and so accident prone that your heart just goes out to him. You can anticipate what's going to happen to him -- and then it does. And you shake your head and smile and keep hoping that something graceful will happen to or for him. Even though the mishaps that happen occur largely because he's trying to get away with something and doesn't want to acknowledge the consequences of his actions.

As I watched the film, from my third person omniscient point-of-view at home, I thought of God watching us, with that Divine first person omniscient view -- and it helped me see a fresh way of how God loves us. That is the loving, watchful, "oh no, what's he/she going to do now, I can't believe it, but I do believe it and..." look. There certainly has to be some kind of cosmic comedy behind some of the things we do and whilst I would not ever posit that God made us to watch us be funny, that has to be one of the side-benefits of watching over us. That's because, ultimately, for all his missteps and misfortune, Mr. Bean rarely comes to harm. Even from things he's caused. Minor scraps and scrapes to be sure, but in the end, all is well, all manner of things are well.

The same is true for us. Ultimately. Under the watchful care of God. Loving us and laughing, perhaps, at the same time. Especially at the things that we do to ourselves. There's the twinkle of Divine amusement that is buoyed by love eternal, all loves excelling.
-- Brent
Posted by Brent Bill at 9:33 AM No comments:

Early reviews of Sacred Compass: The Path of Spiritual Discernment (due for April 1 release) are coming in. Noel Paul Stookey (Paul of Peter, Paul and Mary) says, "The scope of an ordinary compass is limited to 360 degrees. In his new book, Brent Bill places our heart at the center of a SACRED COMPASS; creating, in 'plainspeak' a most welcome handbook for spiritually engaged decision-making."
Nancy and I will be hosting a book release party at Ploughshares Farm on April 13 from 3-6 for folks close by. It'll be a chance to buy books at a hefty discount and visit the prairie at Ploughshares -- now in its 3rd year and about to burst with wildflower blooms and tall grass. RSVP at brentbil@sbcglobal.net Consider yourself invited.
-- Brent 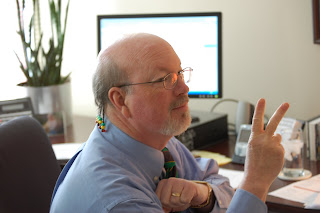 Nancy and I just returned from our first (and probably last!) Caribbean. I did not find shipboard life nearly as restful or romantic as I hoped -- I've been back in Indiana almost 24 hours and still don't have my landlegs. The whole world is rocking and rolling.

Which was the main part of the reason for the trip -- to be musically involved with Lyle Lovett, Emmylou Harris, the Duhks, Patty Griffin, and more. That part -- the music -- was very fun. The time asea was less so (for me).
On a day trip to Jamaica, which was very cool, I did something sort of out-of-character. I got my hair beaded. Okay, so it's more out of the realm of possibility than character -- having so little hair! But I thought it'd be fun -- plus it'd freak out my good friend Tim (who's also my boss).
Here are somethings I learned about having your hair braided.

Wearing them reminded me that appearances really do matter -- too much so. We (and I mean "I") judge too many people -- their intellect, depth, humanity, spirituality, ability, worth -- by how they look and what they wear. I was a bit hurt by those who acted liked nothing was different about me -- when it was so obvious that there was. And was lifted by those who laughed along with the joke I was playing on myself.
Those things along were worth the price of braiding -- physically and fiscally!
--Brent
PS -- The picture above was taken at work. Mr. Old Preppy whose rep tie strips match his beads!
Posted by Brent Bill at 7:32 PM 2 comments:

The Geography of Light 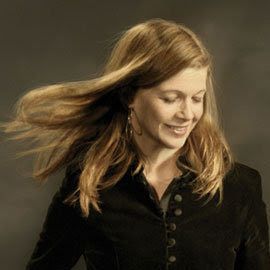 I'm excited. For one it's Friday and Nancy and I are about to be off spending some time with Lyle Lovett and Emmylou Harris and some other musical types in warm, sunny places. For another, Carrie Newcomer's got a great new CD coming out.

"The Geography of Light" officially releases on February 12, but you can preview the album now on carrienewcomer.com. I've been listening to a pre-release version since Carrie gave it to me last November and I think it's her strongest effort yet. Sensitive, soulful lyrics coupled with strong melodies are one draw. The great production values are another. And then there's Carrie's voice -- strong and forceful one phrase, whispering and winsome the next. It's really amazing stuff. My favorites are "Two Toasts" (co-written with Parker Palmer), the haunting "Lazarus" (Since he called my name/Nothing's the same), and "Leaves Don't Drop, They Just Let Go." Every song on the CD (including the quirky, fund "Don't Push Send" -- about the perils of email) is a jewel -- carefully crafted and lovingly presented.

(watch closely and you'll seee me in the video)

Carrie's out touring now in support of the CD. You won't want to miss her if she comes to a town near you. If you happen to see her, tell her that her old, Quaker bowlin' cousin says, "Hey!"
-- Brent
Posted by Brent Bill at 9:38 AM 4 comments: