Contemplative Photography: The do-er's lament: The bills are paid, the beds are made, the tax receipts are filed. The memo's written, I've fed the kitten, and still there is...

One of the great things in my life is having so many creative friends.  That means I get showered with all kinds of great books, CDs, etc.  Below are some short takes on stuff that's landed here at Ploughshares that I think you might just like.

Starting Something New: Spiritual Direction for Your-God Given Dream is Beth Booram's newest book (you may remember that she and I co-wrote Awaken Your Senses a few years back). Beth is a gifted writer and a spiritual director. She's one of the founders of Sustainable Faith Indy, which grew out of a God-given dream of hers. In her book she provides practical advice for people in discern those dreams and helping them, with Divine assistance, to become reality.  Folks who are feeling continual deep spiritual nudges in new directions -- whether to start a ministry, make a lifestyle change, or just grow deeper in their life with God -- will find this book really helpful.

Embracing the Body: Finding God in Our Flesh and Bone is by my friend Tara Owens'. Many Christians are afraid (or even ashamed) of their bodies -- especially as vessels of spiritual wisdom and connection to God. Tara writes with warmth and wisdom to people claim to be people of the incarnation but often live as if only our souls mattered and our bodies did not. She calls us back to our whole selves—body and soul—and in doing so helps us reconnect with incarnational living both through the central historical event that kicked off Christian movement and our ongoing task of being the disciples of Jesus cloaked in flesh and blood.  Tara is, like Beth, a spiritual director. She's the founder of Anam Cara.

A Convergent Model of Renewal: Remixing the Quaker Tradition in a Participatory Culture is C. Wess Daniels' addition to thoughts on revitalizing the Friends message today.  You can read more about this important book here.

Finding God in the Verbs -- about crafting a fresh way of praying -- was co-written with Jennie Isbell.  Publishers Weekly says "this is a fresh, useful approach to a subject much written about. Readers will learn to pray not perfectly but personally."
I've contributed to a couple of projects myself lately. 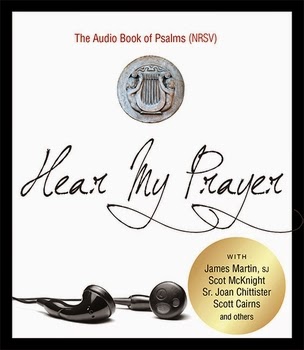 If you'd rather listen than read, check out Hear My Prayer: The Audio Book of Psalms. While I can't stand to hear my own recorded voice, other people say it's not unpleasant. On this set of CDs, my voice joins a number of others (Scott Cairns, Paula Huston, Sr. Joan Chittister, and many more!) in reading this most amazing book.
Posted by Brent Bill at 8:00 AM 4 comments: 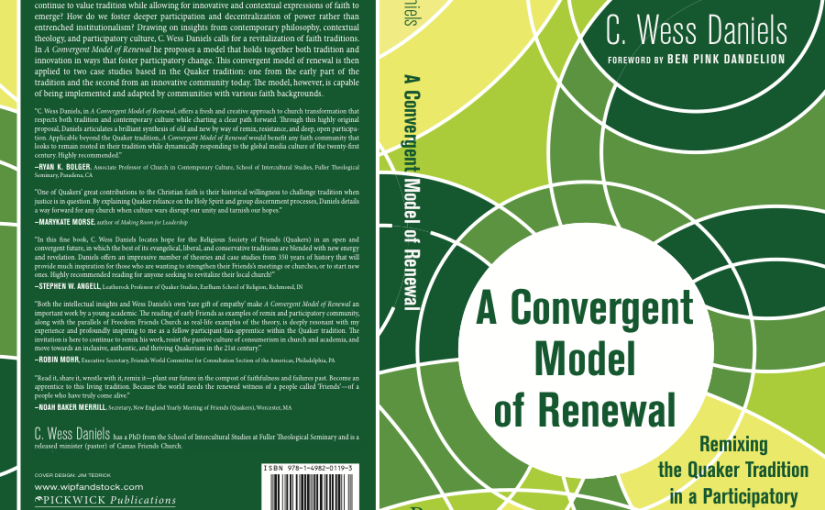 A few weeks ago I found a copy of C. Wess Daniels A Convergent Model of Renewal: Remixing the Quaker Tradition in Participatory Culture in my mailbox. I'd been looking forward to this book for a long time. So much so that I tore open the packaging on the long walk back from the road to the house and started reading it.

For those of you who don't know Wess, for the past more than five years he's been the released minister at Camas Friends Church (in Washington state), has been an adjunct professor, and has a PhD from Fuller Seminary. He also makes a mean sauerkraut and is a connoisseur of coffee. Wess has just been named the William R. Rogers Director of Friends Center and Quaker Studies at Guilford College, succeeding Max Carter, who will retire this summer after 25 years there.

In my opinion Guilford could not have made a better choice.

Wess has been one of the foremost articulators of the "convergent Friends" movement and practices what he preaches about Quaker renewal. I've been fortunate enough to have had a number of conversations about the latter topic with him over the past few years. Which is why I looked forward to his book.

Shortly after I received it, I was bound for a series of airplane trips. I usually don't read on planes -- mostly (since I hate flying) I listen to tunes and try to forget that I'm on a plane.  This time I made an exception. I took the book and a yellow marker.  We had not taken off on the first leg of the trip before I had begun highlighting sections.  That's because there's much good stuff herein -- including sections like:
"Each...formulated branch touts its own rival theories about the origin and core message of the Quaker tradition. Each polarization represents only a piece of the larger tradition."

I could fill this blog with other such gems. Wess has a clear eye and views us Quakers honestly and provides a good analysis of the issues facing all of our various permutations -- Evangelical, liberal, middle of the road, and so on.  But since this is blog -- and not an academic review -- I need to be brief.

Here's why I think Wess' book bears reading.  It's an articulate, accessible analysis of the current state of North American (primarily) Quakerism. He also provides a cogent portrayal of the participatory and remixing nature of early Quakerism and why it had an such an impact on culture, faith, and life.  He offers a model "for participatory renewal" that has much to commend it. And I do mean much.  These pieces (plus Ben Pink Dandelion's foreword) make the book worth reading.

But, in the interest of integrity (since I am a friend of Wess' and don't want readers to think I didn't read the book critically because of our friendship), I also have to name my quibbles.  One is that there's one contemporary case study -- that of Freedom Friends Church.  Now I find Freedom Friends an amazing place that is doing good work, but I would have rather seen a summary of findings from a number of contemporary meetings/churches Wess feels are implementing the remixing/participatory model he outlines.  One example hardly feels convincing.

Another quibble is the emphasis Wess places on convergent Friends faith and practice as a base for his model. I love his model -- less the descriptor "convergent." Regarding convergent Friends as a model, well, I am not convinced -- never have been. That's probably due in no small part to my skeptical nature. But I think it also has something to do with having been a long-time congregational consultant and seeing how churches and meetings look for the one program/theology/resource/practice that will bring about renewal and then import it wholesale, only to find it doesn't fit them.

The convergent Friends movement has much to commend it. But it is not, as a package one can import, for all Friends. Instead, I think each Friends meeting/church needs to wrestle with the points that Wess raises in this book -- have we abandoned Quaker tradition as irrelevant in our proclamation of Jesus or have we abandoned Jesus in order to practice our post-modern discover your personal truth with us? And everything in between.  Wess' book lays out some of the questions we all -- Evangelical, ultra-liberal, mushy-moderates, conservatives -- need to consider and struggle with. He shows the potential power of remixing vital tradition and spiritual experiences and language and culture into a vital Quaker way for today. But I don't think it's dependent on the convergent model.

When I mentioned my concern to Wess, he replied, "I only write about the Convergent Friends group a little and make more of it as a gesture towards holding onto both tradition and innovation. The hope of the model is that Friends, within whatever context they are in, will find ways to hold that tension, not so much become a part of the group of 'convergent Friends' who get together have pizza, chocolate chip cookies, and worship together. I guess what I am taking from them is that commitment towards both tradition and innovation more than extrapolating insights from what those groups do."

That said, I fully embrace his model and feel it can truly help Friends move forward in culturally and spiritually relevant ways.

In the book, Wess says:
As a highly participatory faith tradition, Quakerism is uniquely positioned ... in today's culture, reformulating the movement in ways that might bring about renewal.
I would drop the "might." I say that because that's what non-Quakers like Phyllis Tickle and Diana Butler Bass involved in the renewal and emergent movements among Christianity have been saying about the opportunity for Friends today.  Wess has hit the Quaker nail on the head here. His call to remix and become fully participatory is spot on.

Get the book. Read it. Share it. Ponder it with Friends.

"Quakers and Cajun: Equality for All" 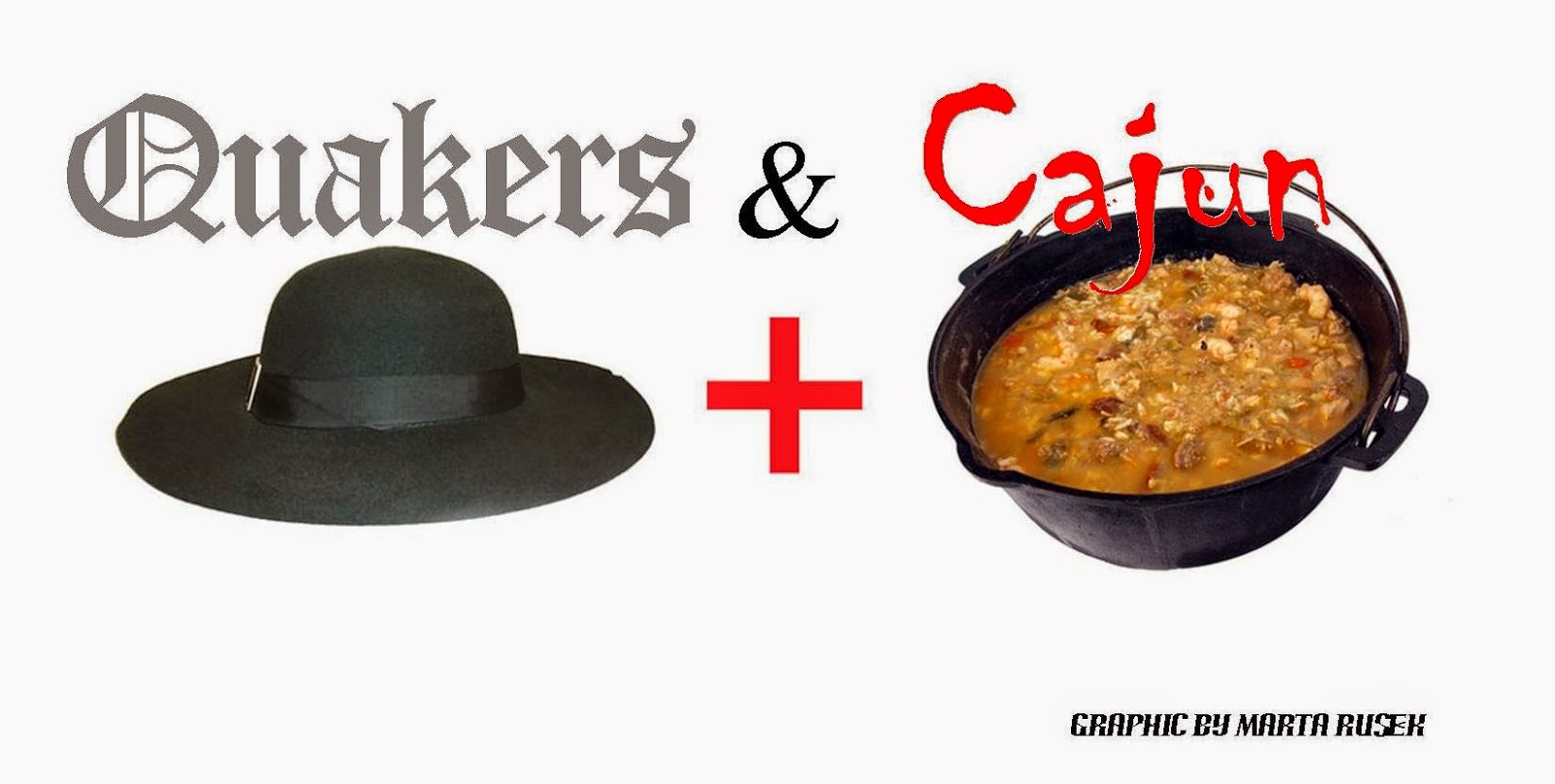 When many people hear the word Quaker, all they think of is oatmeal. Quakers, though, are part of a vital faith tradition that is older than the United States but is as modern as today. Including standing for equality of all people!

In light of the controversy over Indiana's Religious Freedom Restoration Act, you might want to come and find out more about these quirky Quakers and their commitment to deep, personal spirituality, contemplation, equality, social justice, and peace. Equality will be the main focus this month. 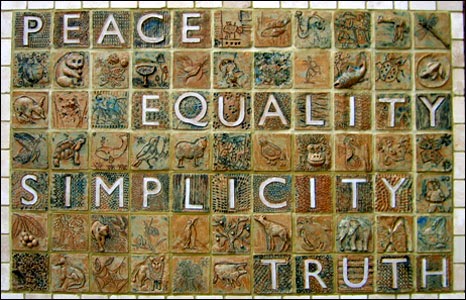 Noted Quaker author, photographer, and retreat leader Brent Bill, a member of Spirituality & Practice’s Living Spiritual Teachers Project, will present a fast-paced, whimsical, and informational presentation about Quakers and their on-going work for equality. It's a topic many Hoosiers are talking about due to the passage of SB 101 the "Religious Freedom Restoration" act.

Zydeco's Cajun is located at 11 E. Main St in Mooresville. We'll start at 6;30 with a welcome, choose our dining delights, enjoy food and conversation and start the program around 7:15.

There will be plenty of time to ask questions about Quakers and enjoy Zydeco's great food and libations. You'll find that the food won't be the only thing that's spicy that night!
Posted by Brent Bill at 3:54 PM No comments: