I got in trouble yesterday. That's not unusual. I seem to get in trouble quite often. Usually I feel bad about it. In this case, I don't.

If you would have talked to the 1970s and 80s Brent Bill, he probably would have echoed many of the things that some of these friends and family are saying.  But then I lived a pretty insular (rarely encountering Christians countering a specific Evangelical mindset (that one which grew out of what many in gospel songs call the "old time religion" -- the 19th century Holiness revivalist movement). That old time religion, invented in the 19th and early 20th century, was certainly not the "old time religion" of Jesus and the apostles though."

It is hard to say when the change in my thinking about LBGTQ rights began changing. It could be in the late 80s when a good friend of mine led the charge against LBGTQ people and meetings in our yearly meeting -- and then, a couple of years later was found to be gay.  By then I realized also that my family includes gay LBGTQ people. I was named for a gay man -- a good friend of my parents (and I still have his old MG!). I also began teaching and had students that were LGBTQ. And I some of the deepest, most faithful Christ-followers I know are LBGTQ. Their faithfulness to Jesus and devotion to personal and corporate Christian faith at times puts mine to shame.

And so I have changed. I read the Bible a bit differently than I used to.  Yes, I know the Bible verses that are used by those opposed to LBGTQ.  Both Old and New Testament verses. I also know that many of those same people completely ignore many Old and New Testaments verses when it serves their beliefs. I'm not going to go into examples of that now.  But let me say that when this post (and others like it appeared on my Facebook page, I began receiving corrective posts from some friends and family that


When I finally got home last night, all of this could have kept me up all night contemplating it. Except that I didn't get home until 1 a.m. and went directly to bed and fell asleep.

The interwebs didn't, though. They kept posting and I was awakened, on this Lord's day, to more discriminatory screeds in the name of religious purity and biblical adherence.

I wondered if 1973 would be a good date -- pre-seminary, still attending the same church I grew up in.  Nope, Things were already in motion that made me question -- new translations of the Bible, Catholic friends, and that afore-mentioned gay man that I was named for (who I really liked).

After more pondering, I decided to land around 313 CE. That would miss the Roman persecution, be ahead of adoption of the Nicean creed, Christians were one big happy family then, sitting around reading the Bible (King James Version?).

I invited all those who sent me corrective emails and posts to travel back there with me. Of course, the woman who sent me a long list of scriptural proofs of my error won't be able to do that -- no email of course and likewise, women were to keep silent in the church and not ever try to teach a man. But we won't have worry about serving pizza to LBGTQ, because according to one fellow who writes me every time I post on this subject, there weren't any back then. Not having been there myself, I guess I have to take his word for it. I am pretty sure there wasn't any pizza,though, so that solves that problem.

But, the more I think about it, I think I'll stay in this time. I'd rather wrestle with what the Bible says (and what people say the Bible says) than be a part of a same thinking bunch of people (sounds rather cultish to me). I'd also rather live in a time with safe food, good water, nice homes, means of traveling the world, instant communication, health services and more that Biblical times people could only marvel at, And try to make sense of the ways of God (and the ways God is calling me) in this day and time.

If you feel your faith calls you to deny pizza, genderless restrooms, marriage, et al to LBGTQ folks, well, that's between you and Jesus. As for me, "Ally, ally, in free. Straight. Gay. Democratic. Republican. Donald Trump. Bernie Saunders. Muslims. Jews. Evangelicals. Unitarians. In the name of Jesus whom I try to serve faithfully (and often fail), I welcome you. For health care, prayer, or pizza -- if there's any in the house.

"Delivering the Truth" -- A Quaker Mystery 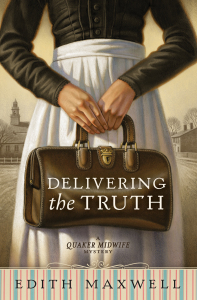 I admit it. I love a good mystery. And I love books with Quaker characters, if they're well written and not hokey like some of those... um ... genre sectarian "romances" ("Simple Love: A Mennonites Go Mad Book"). So when you put mystery and Quaker characters together, then I'm predisposed to like such a book.  As I did with Irene Allen's series of "Elizabeth Elliot" mysteries a few years back (Quaker Silence, Quaker Witness, Quaker Testimony, and Quaker Indictment). Those books are still favorites of mine.

So I was delighted to receive an advance review copy of Delivering the Truth: A Quaker Midwife Mystery (Midnight Ink, 2016) by Edith Maxwell (disclaimer: Edith is a Facebook friend of mine). I was especially intrigued to find out that Quaker poet and abolitionist John Greenleaf Whittier was going to make more than an occasional appearance throughout the book.  Poet as  a sorta sleuth?! Well, maybe that's not so far-fetched, I thought.

The story is set in 1880's Amesbury, MA where Quaker Rose Carroll is a midwife. As such, she is privy to many of the goings on around town. Plus she is an inquisitive sort who's feeling a bit restricted by society's expectations around women and the Society of Friend's expectations of dress, behavior, and more.  The conventions of her time and religion are a bit more than stifling -- and she often breaks out of the molds that society and the Society set for her.

For one, she falls in love with a non-Friend.  Yikes. That could get a Quaker kicked out of meeting -- especially if marriage loomed.

For another, her inquisitive nature leads her into nosing around a series of mysterious deaths that come as a result of an arson at a carriage factory and ensuing events.  A modern Quaker woman like Elizabeth Elliot playing detective is not so unusual perhaps, but a 19th century Friends woman? This leads her into all sorts of situations -- which also result in her becoming one of the prime suspects in the murders!  Now that's my kind "bad Quaker."

The mystery is mysterious (I had suspicions about what was going on, but couldn't exactly figure things out), the characters (even the "baddies") are well drawn (perhaps that comes from the Quaker belief that "there is that of God in everyone -- and Maxwell has drawn it out!), and the writing is spot on.  I pretty much read it straight through.  And had a hard time putting it down when Quaker midnight (10 pm) drew near. I stayed up late just to finish it.  And I never stay up late (as my friends/Friends know).

If you like mysteries (whether or not you like Quakers), you'll enjoy this tale well told. If you enjoy stories with Quaker characters, you'll like this honest portrayal of Quaker faith and life in the 19th century. And if you're fond of Quaker mysteries, then Delivering the Truth will be just your cup of Friendly fiction.
Posted by Brent Bill at 11:59 AM No comments: