Sitting at the lone traffic light on my way to the freeway this morning (ah, the joy of country life), I could see a car coming up the road on my right pause, wondering if she could turn right on red before the light changed for me. I motioned her through and then the light went green for me. Immediately the yahoo behind me honked -- upset, I guess, that somebody got in front of us for our last 1/2 mile to the Interstate. She moved right along, not holding anybody up, but this guy in his Mercedes sat on my bumper the whole way. As we moved onto the ramp, I sped up ... 50 ... 55... 60... it's not like I'm known for driving slow... 65 ... 70... C230 right on my bumper. Then he pulled out on the right, zoomed past me, and entered the freeway a car ahead of me. As he flew by, I noticed his shiny new Indiana specialty plate -- "In God We Trust."

You'd better trust God, I thought, because the way you're driving, to quote an old Harry Chapin song,"He's the only one who can you now."
Uncharitable, I know.
It's not that I have anything against specialty plates. I have one myself, touting protecting the environment. For the rest of the trip in I pondered what bugged me about this guy and his vanity plate. And it's just this ... it's me. Besides being a Quaker type who eschews outward symbols of faith, I'm adverse to "In God We Trust" plates, fish decals or chromed symbols, clergy badges on my car because I know I wouldn't live up to the advertisements. My license plate would proclaim my trust in God, but my driving would, at times, reflect less than Christian values implicit in such a claim of trust. Just like Mr. Mercedes did this morning.
There's a Quaker saying that we are to let our lives speak. I have hard enough time making sure that my life is saying something positive -- I don't need to add my license plate into the mix.
--Brent
Posted by Brent Bill at 8:49 AM 4 comments:

The Art of Living

Living is an art. It calls for imagination and spirit. One thing that shows it’s an art, not a science, or even a craft, is that there is no one way, no set formula to follow. Living into “as way opens” is understanding that the “way” that opens is unique to each person. God uses our life experiences to open the way, a way that we can perceive as we move through life, if we believe that our lives are more than our own and that we are moving through life with a holy purpose and safe in a Divine promise.

Yes, we may be flawed and confused. In that case we have good company in the Bible – David and his lusty heart, Noah and his getting falling down drunk after docking the ark, and others. But these were all folks chosen to do God’s work. God’s funny that way – choosing the goofiest of those among us to accomplish His purposes. In doing God’s work in spite of their shortcomings, these people stand as symbols of the holiness to which each of us is called. They encourage us to see that way opens to follow God in life’s messiness, including our self-made messiness.

Learning to see the ways of our life opening means that we need to be authentic people who live life as fully human, not as perfectly pious professional religious persons. What will then make our faith genuine for ourselves and others is that we are aware of the circumstances through which we have passed. We, and they, see our flaws and frailties, and still know that we are people who hunger after, and are loved by, God. 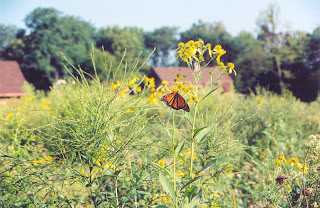 Ah, the first day of spring! It feels like it here in Indiana -- sunny, bright, mid-50s, muddy. And all around are signs of spring and signs of God at work. The former are fairly obvious at Ploughshares -- crocus creeping up through the mulch, the bald eagles adding to their nest as they get ready for (hopefully) another hatchling or two, buds popping on all the saplings we planted last summer, the normally sedate, meandering creek at times a raging river whisking huge logs and other debris downstream (or leaving it littering our field).

The latter -- signs of God -- are usually a little less obvious, although those of us who attend worship services will hear lots of (mostly children's) sermon allusions to seeds sprouting et al as spiritual analogies of the resurrection. While those are good, and true, the signs of God I'm speaking of are obvious only if we pay attention in love, obvious only when we let our hearts and minds be open to the mysterious workings of God around us. I tend to notice those signs by using my senses. When I see the eagles soaring on the windy days, held aloft by the strong spring breezes and their mighty wings, I'm reminded how God sustains us -- "they who wait for the LORD shall renew their strength, they shall mount up with wings like eagles" (Isaiah 40). When gather up broken branches from the many thorny locust trees and a thorn pierces my glove or shoots up through my boot, I'm reminded of a crown of thorns worn in love and agony thousands of years ago -- and it becomes real today. I could go on with smells, and sounds, and taste, but you get the idea.
I hope you'll take this time to "taste and see that the Lord is good." To savor the "sweet smelling sacrifices." And to listen with your ears and heart for signs of spring and signs of the everliving and everloving God. For, as poet Gerald Manley Hopkins, says "Christ plays in ten thousand places." Where is He playing around you?
--Brent
Posted by Brent Bill at 8:32 AM 1 comment:

A Lenten Thought -- or Two