Compass. As a kid the very word conjured images of treks across trackless wastes, blazing trails through primeval forests, and other adventures unavailable to city boys. I didn't need a compass in a city composed of north-south avenues and east-west streets. One block north, two blocks west, two more blocks north and I was at my grandparents. Simple. Straight. No adventure.
"Compass" still hold an aura of mystery for me today in this time of GPS and turn by turn directions issuing out of my car's stereo speakers. It still implies a journey where no navigation DVD has gone and no satellites peer. And while there are few of those in my business life, they abound in my spiritual life.
Unlike GPS and other wonders of modern direction finding, a compass does not give us step by step steps to our destination. It does, though, no matter what direction we turn, always point us to true north -- a destination most of us (unless we're named Amundsen, Byrd, Peary, or Henson) never reach in this lifetime. This is a metaphor for our spiritual lives and the work of discerning God's will for them. There are many times I wish God would speak as clearly and as obviously as Mapquest or GoogleMaps. But the life of faith is not that way. Instead our sacred compass points us to our spiritual true north -- the mind and love of God -- and asks us to travel by faith and use the various maps we've been given. Things like spiritual friends, the Bible, prayer, and other faith practices. Our sacred compass is that which is embedded in our souls that calls us to life with God -- life abundant and adventurous, even during those times we wish it was less so.
-- Brent

Posted by Brent Bill at 6:41 PM No comments: 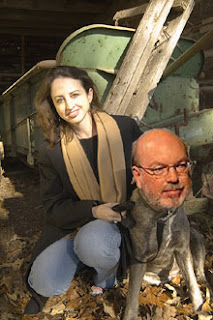 Yep, that's right, the girl named Zippy and I will be doing a gig together -- sort of, kind of... We're both presenters at Earlham School of Religion's annual Ministry of Writing Colloquium in lovely Richmond, IN (10 miles from any known sin). She's the headliner and I'm doing a couple of workshops. So about the closest we'll be together is when she's speaking and I'm sitting in the audience ... or at the booksigning when I ask her to sign a copy of The Used World, her newest novel.
Besides Haven and me, there are other really good presenters -- Lil Copan of Paraclete Press, poet Maurice Manning, Old Testament scholar and humorist (some combination, eh!?) Howard Macy, and others. You can download a copy of the registration form for this October 26-27 event at http://esr.earlham.edu/events/writersColloquium/esr_colloquium_07REF.pdf
It's a great tim 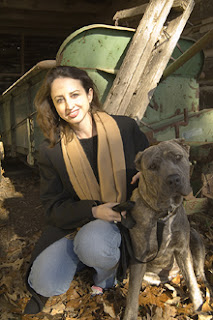 e of hanging around with other writer types, making connections and meeting new friends. A good time will be had by writers and readers. Plan now to attend and besides hearing Haven's great prose, you'll get to hear me read my short story "A Trip to Amity." Why would you want to miss that?!
Hope to see you in Richmond!
-- Brent
Posted by Brent Bill at 1:35 PM No comments: 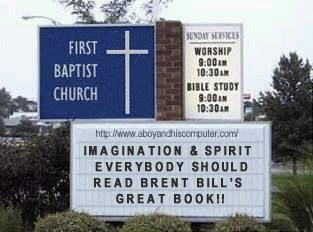 “Let's Meet At My House Sunday Before The Game.” – God. So said the white letters on a black background on a billboard. Some co-workers and I noticed it on a recent road trip to Evansville via a route not exactly known for it’s scenic opportunities. US 41 is long stretches of boring four-lane with only billboards and a few small towns to look at for any kind of conversational stimulation.
So the billboard got conversation going. “Like God would really speak in billboards,” scoffed Nancy A (so called to distinguish her from my wife Nancy B(ill)). At least, I pointed out, this message was fairly benign. Welcoming even. Unlike others we began to spot – the ten commandments painted in stark black on the side of a building, a sign warning “Turn or Burn” with burning red letters, and worse.
It turns out that the “God Speaks” ads were created by the Smith Agency in Florida which won awards for their campaign. Targeted at people who no longer attend church on a regular basis, there were eventually the campaign went nationwide and developed seventeen messages including, “C'mon Over And Bring The Kids,” “What Part of "Thou Shalt Not..." Didn't You Understand,” and “Loved The Wedding, Invite Me To The Marriage.”
For all our poking fun at these and other signs, a thought came to me – there are many times I wish God would speak to me as clearly and as obviously as on the billboards. But the life of faith is not that way. God, in my experience, is much more subtle. To discern God's direction, I have to pay quiet, close, loving, attention to the people, places, and things around me.
That’s what Elijah discovered. Here’s a fellow you would think would have pretty good spiritual ears. After all, he had a big showdown with the prophets of Baal on Mount Carmel. Elijah triumphed, and the idolaters lost -- their lives. Then Queen Jezebel sent an un-thank you note to Elijah saying, “You killed my prophets. I’ll kill you.” Elijah’s spiritual zeal evaporated and he got out of town, praying as he went, “God, I’ve had enough. Take my life.” God does not oblige.
Instead God tells him: “Go out and stand on the mountain before the LORD, for the LORD is about to pass by.” Now there was a great wind, so strong that it was splitting mountains and breaking rocks in pieces before the LORD, but the LORD was not in the wind; and after the wind an earthquake, but the LORD was not in the earthquake; and after the earthquake a fire, but the LORD was not in the fire; and after the fire a sound of sheer silence. When Elijah heard it, he wrapped his face in his mantle and went out and stood at the entrance of the cave. (see 1 Kings 19)
God’s whisper is so deep and so holy that it may appear to be sheer silence – unless we pay heartfelt attention.
--Brent
PS The above church sign is not real -- I computer generated myself. Still... I wouldn't mind seeing a sign or two like that!
Posted by Brent Bill at 9:46 AM 1 comment: