Words Can Kill ... And So Can Bullets, Of Course: Some More Summer Book Reviews

I'm finally learning to read on my tablet.  Sigh.  Giving in to the modern world.  I bought one of the early Kindles -- and hated it.  I never finished a book on it.  Just could not stand it.

But that was then.  This is the 21st century -- and many pre-release review copies of books (both by people I know and those who don't) are only available as e-books.  So, since my suitcase was full when I headed to Bald Head Island recently, I loaded my Kindle on iPad with new books from NetGalley.

One was good.  Two were really good -- for completely different reasons.  And one (that shall go unmentioned) was dreadful.

First the good.  That was Top Down: A Novel of the Kennedy Assassination by newsman Jim Lehrer.  Lehrer's premise is that the agent who ordered the top off the Kennedy limo (since it had quit raining) is haunted by that decision and is descending into a private mental health hell.  A newspaper man who covered the assassination and asked the agent if the top was going to stay up or down is enlisted by suffering agent's attractive and tenacious daughter to help her father.

As someone who was alive in 1963 and remembers -- as everyone of age back then does -- where he was when he heard the awful news out of Dallas that November day, I hoped to learn something new or at least get a different look on the events of that day.  What I got was a good summer time read -- this would be a fine beach book.  But, sad to say, it doesn't come out until October 2013 -- a little late for beach reading.  It's not a bad book.  It's a tale told well enough, but not well enough to make it a must read.

Next the two really good.  One is really good for, in part, taking me into a world I know nothing about really and making me want to stay there.  That world is the one of Maine state game wardens.  Now, in the interest of integrity, it's a world I visited before after meeting Kate Braestrup at a writing conference.  Her Here if You Need Me: A True Story tells of her life as a chaplain to the Maine state game wardens.  And it tells it very well -- so much so that when I saw Paul Doiron's Massacre Pond and read the description (The beauty and magnificence of the Maine woods is the setting for a story of suspense and violence when one powerful woman’s missionary zeal comes face to face with ruthless cruelty.) I thought I'd take a chance.

I'm glad I did.  Like Dick Francis did years ago with horse racing, I found myself drawn in by a master story teller.  Mike Bowditch, the game warden, is a likable protagonist caught in a web of intrigue ... oh how cliche-ish (but true) ... between Maine state game warden politics, moose-hugging rich environmentalists with seeming no regard for the local logging industry, local logging industry big-wigs who help out with Big Brothers but may have a seamy side, a very attractive young woman, the woman he really loves, and ...    Well, it's a pretty good size web ole Mike is caught in -- which makes for a good story -- beach or otherwise.  And the good news for beach readers, is that Massacre Pond will be out in July.   And it's origins are in a true tale.

The second really good book is about the power of words.  Sticks and stones may break our bones, but words can lead us to homicide.  Lexicon, by Max Barry, features a street-wise hustler (Emily Ruff) who is trained to have a persuasive way with words.  Very persuasive.  This grrrl of the streets is not always trust-worthy -- or is she?  The novel is all about the power of words and their effect on us.  It's also a cautionary tale about all the data gathering that is going on all about us.  I'd say, given the recent NSA revelations and the hunt for Edward Snowden, the publisher scored a wonderful release date (June 18, 2013).

Lexicon is a bit dystopia in the vein of Margaret Atwood's novels and also similar (in the theme of the power of words) to Ben Marcus' The Flame Alphabet.  You can read my review of the latter here.  Its readability puts it closer to Atwood than Marcus' ponderous book and so I really enjoyed it.  Yes, you have to suspend disbelief.  But any of us who work in words -- fiction or non -- invite readers to do that somewhat every day.  And we who work in words know their power -- and hope to use them (benignly and beneficiently, in my case!) to persuade readers.  Emily Ruff is just a bit more casual -- at least at first -- about how she uses words.  Lexicon is thoughtful thriller.  It's no War and Peace, but it's a better than usual summer time read that entertains, makes you think and is available now.

Posted by Brent Bill at 3:37 PM No comments: 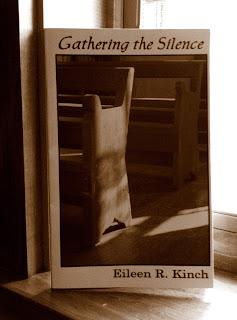 I am happy to be holding in my hands Eileen R. Kinch's poetry collection Gathering the Silence.  I've been an admirer of Eileen's poetry since I first heard some of it a few years back.  Eileen is a Conservative Friend of deep spirituality and poetic ability.  Her poetry's been nominated for a Pushcart Prize and has appeared in a number of periodicals.

Her poems are often gentle in spirit.  Kind.  Helpful.  Even their titles reveal this  -- "Where the Worlds Come Together" instead of "Where Worlds Collide," for example.

That is not to say they are not questing, passionate or -- even -- furious.  "Witness" is especially so.

Your eyes have seen,
your ears have heard

a Friend beat the cat...

Gathering the Silence is a truly fine assembly of first rate poetry.  And for me, poetry often is prayer.  I'll be holding it close for awhile -- at home and as I travel.  A tiny book of blessing and challenge.

(And, if you're in the Philadelphia area July 14, be sure to stop by Pendle Hill to hear Eileen read from Gathering the Silence).

Another book I've enjoyed greatly is Men Pray: Voices of Strength, Faith, Healing, Hope and Courage.  I've long known men pray -- I mean, I do!  And I grew up watching my father, grandfather and other men important in my life do so.  Still, I'm not a very good pray-er -- so any assistance is gratefully received.  And these prayers by other men of faith help me move outside my usual prayers and into new territory -- for that I'm grateful (and probably, too, are God's ears!).

One of my favorite prayers so far (since I'm in the midst of writing/editing) is Kent Ira Goff's "Grit Seasoning."

While I do this grit
work, season
the irksome pieces
with enough
Ahas! to remind
of the reason.

I heartily commend both these books to you -- you'll be blessed by them.

What Is True
by Ben Kopel 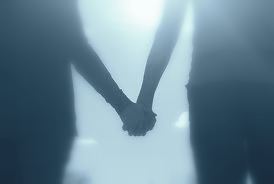 one must be one
to ever be two

and if you
were a day
I'd find a way

to live
through you

Ben Kopel is the author of Victory (H_NGM_N BOOKS, 2012). He currently lives in New Orleans, Louisiana, where he teaches creative writing and English literature to high school students.
Posted by Brent Bill at 8:49 AM No comments: 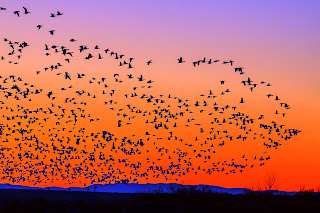 with thousands
of starlings

when the many-
headed body

a sudden congress
of wings

in a maneuvering
wave that veers

and wheels, a fleet
and schooling swarm

in synchronous alarm,
a bloom radiating

in ribbons, in sheets,
in waterfall,

a murmuration
of birds

that turns
liquid in air,

on the shore,
or the breath

of a great
seething prayer.

Sidney Wade is the author of six books of poetry including Straits & Narrows (Persea Books, 2013). She is also a translator of Turkish literature. Wade lives in Gainesville, Florida, and teaches at the University of Florida.
Posted by Brent Bill at 8:29 AM No comments:

"Let me cease to fear the embrace that..." 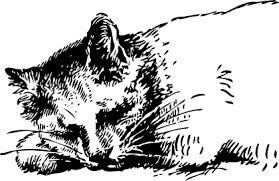 I remember the long orange carp you once scooped
from the neighbor's pond, bounding beyond
her swung broom, across summer lawns

to lay the fish on my stoop. Thanks
for that. I'm not one to whom offerings
often get made. You let me feel

how Christ might when I kneel,
weeping in the dark
over the usual maladies: love and its lack.

Only in tears do I speak
directly to him and with such
conviction. And only once you grew frail

did you finally slacken into me,
dozing against my ribs like a child.
You gave up the predatory flinch

that snapped the necks of so many
birds and slow-moving rodents.
Now your once powerful jaw

is malformed by black malignancies.
It hurts to eat. So you surrender in the way
I pray for: Lord, before my own death,

let me learn from this animal's deep release
into my arms. Let me cease to fear
the embrace that seeks to still me.

"For a Dying Tomcat Who's Relinquished His Former Hissing and Predatory Nature" by Mary Karr, from Sinner's Welcome. © Harper Collins, 2006.

From "The Writer's Almanac"

Posted by Brent Bill at 4:03 PM No comments:

"The dark thing is hardly visible..." 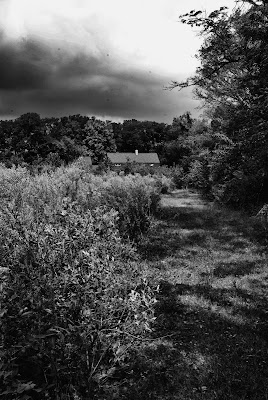 A Dark Thing Inside the Day

So many want to be lifted by song and dancing,
and this morning it is easy to understand.
I write in the sound of chirping birds hidden
in the almond trees, the almonds still green
and thriving in the foliage. Up the street,
a man is hammering to make a new house as doves
continue their cooing forever. Bees humming
and high above that a brilliant clear sky.
The roses are blooming and I smell the sweetness.
Everything desirable is here already in abundance.
And the sea. The dark thing is hardly visible
in the leaves, under the sheen. We sleep easily.
So I bring no sad stories to warn the heart.
All the flowers are adult this year. The good
world gives and the white doves praise all of it.

"A Dark Thing Inside the Day" by Linda Gregg, from All of It Singing. © Graywolf Press, 2011
From "The Writer's Almanac"
Photo by Brent
Posted by Brent Bill at 3:47 PM No comments: