Christ came juggling from the tomb,
flipping and bouncing death's stone pages,
tossing those narrow letters high
against the roots of dawn spread in cloud.
This Jesus, clown, came dancing
in the dust of Judea, each slapping step
a new blossom spiked with joy.

Hey! Listen -- that chuckle in the dark,
that clean blast of laughter behind --
Christ comes juggling our tombs,
tossing them high and higher yet,
until they hit the sun and break open
and we fall out, dancing and juggling
our griefs like sizzling balls of light.


-- Eugene Warren, from The Risk of Birth, poems selected by Luci Shaw
Posted by Brent Bill at 8:27 AM No comments:


The heavens keep telling
the wonders of God,
and the skies declare
what he has done. -- Psalm 19:1

"The Parable of the Lost Lens": Fifty-acres and a Fool Series


The Parable of the Lost Lens

And, lo, Brent was walking up the driveway when a number of the scribes and Pharisees came unto him, saying, “Tell us, O Brent, the way to see as thou seest, for thou art wise in these ways.”  Brent squinted at them and then said, “One day a farmer went out to mow.  And as he walked out unto the John Deere, he cleaned his glasses and noticed that one lens seemed loosed.  Now these were the same glasses he had laid behind the tractor the year before whilst working on it and upon which his good wife had trod while walking up behind him to see what he was doing and which his daughter who worketh at a place of eye care had repaired, so had hence be healed earlier.  The farmer looked upon the lens, sideways, straightaway, and upside down; and lo he determineth nothing, so he placed the glasses upon his head, climbed uponeth his tractor and mowed the prairie.”

The scribes and Pharisees were enthralled, for Brent spoke as one with authority.  “After mowing the prairie whilst listening to tunes uponeth his iPod, the farmer climbed down to clean the field trash off his tractor and bush-hog and, lo, whilst brushing the trash off the bush-hog’s deck a piece of long weed hit the lens and sent it sailing into the field.  Being a man of exceedingly calm demeanor, the farmer removed his glasses and stared upon them.  He place them back on his head and took them off again.  Lo, his sight was impaired, so he folded the glasses, put them in his coverall’s pocket, and searched up on his hands and knees through the field for the lost lens.  He sifted field trash through his fingers, he laid uponeth the ground and looked for a glint of the sun off the lens, and, behold, that which he sought for was revealed unto him and he picked up the lens with great rejoicing because that which was lost was now found.  Riasing the lens toward heaven, he gave thanks, brushed the dust from the lens, and put it in his coveralls’ pants pocket.”

After putting the tractor in the barn, he went into the farmhouse for his ritual cleansing and, lo, he pulled the lost lens from his coverall’s pants pocket and placed it, rejoicing, upon the Maytag.  Then he reached unto the top pocket for the glasses and they were not there.  Nor were they in any of the other of the coveralls pockets.  Nor were they upon the tractor, the bushhog, the toobox wherein he keeps his pipe (which was in the same pocket as the glasses) and other things.  He wandered out into the field and with wailing and gnashing of teeth, utterances of foul curses, he searched the field to no avail.” The farmer returned to the farmhouse, crying, “Woe is me, for that which is lost is found but that which was not lost is now not to be found.”

Then Brent grew quiet.  The scribes and the Pharisees pondered his words.  “What manner of man is this that teaches this way?” said one.  Another said, “These are hard things.  What might they mean.”

“Beats me,” muttered Brent walking away. 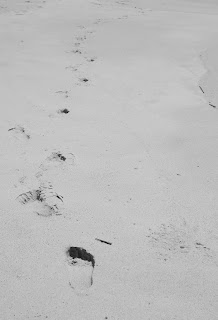 I said
this desert land is barren
void of life and beauty.
I drive for miles
see nothing
only sand and sage
feel nothing
only wind and heat
taste nothing but spit
dried spit.
He said
have you ever driven
in spring
through this same desert
seen blossoms flower
gorgeous wild?
It's all a thing of timing.
Seeds of beauty
are there now hidden
waiting fall of rain
to bring them life.
Lord send rain
upon my world
my life
I'm tired of dried spit.
Source: "A Psalm in Mojave Desert" from Psalms of My Life

Add your thoughts at inward/outward 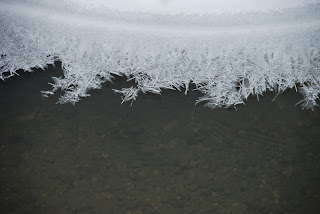 by Hayden Carruth
After Wang Wei

Twilight comes to the little farm
At winter's end. The snowbanks
High as the eaves, which melted
And became pitted during the day,
Are freezing again, and crunch
Under the dog's foot. The mountains
From their place behind our shoulders
Lean close a moment, as if for a
Final inspection, but with kindness,
A benediction as the darkness
Falls. It is my fiftieth year. Stars
Come out, one by one with a softer
Brightness, like the first flowers
Of spring. I hear the brook stirring,
Trying its music beneath the ice.
I hear - almost, I am not certain -
Remote tinklings; perhaps sheepbells
On the green side of a juniper hill
Or wineglasses on a summer night.
But no. My wife is at her work,
There behind yellow windows. Supper
Will be soon. I crunch the icy snow
And tilt my head to study the last

Silvery light of the western sky
In the pine boughs. I smile. Then
I smile again, just because I can.
I am not an old man. Not yet.

From "The Writer's Almanac"

Photo by Brent
Posted by Brent Bill at 9:18 AM No comments:

Boy at the Window

Boy at the Window

Seeing the snowman standing all alone
In dusk and cold is more than he can bear.
The small boy weeps to hear the wind prepare
A night of gnashings and enormous moan.
His tearful sight can hardly reach to where
The pale-faced figure with bitumen eyes
Returns him such a god-forsaken stare
As outcast Adam gave to Paradise.

The man of snow is, nonetheless, content,
Having no wish to go inside and die.
Still, he is moved to see the youngster cry.
Though frozen water is his element,
He melts enough to drop from one soft eye
A trickle of the purest rain, a tear
For the child at the bright pane surrounded by
Such warmth, such light, such love, and so much fear.

"Boy at the Window" by Richard Wilbur, from Collected Poems. © Harcourt, 2004. Reprinted with permission. (buy now)

From "The Writers Almanac"
Posted by Brent Bill at 9:59 AM No comments:

On The Bible, History Channel, and Teenage Mutant Ninja Angels


O what have they done to thee?


You used to be the Word of God

That’s what I thought last night when I started watching “The Bible” on History Channel last night.  It’s Hollywoodishly dramatic enough that when my good wife fell asleep watching it and awoke during “The Vikings” which followed, she assumed the latter was a continuation of the former and wondered which book of the Bible the producers were mangling now.  Only when a Viking ship appeared did it become clear it was a whole ‘nother show.

Now let me say I am not a Biblical scholar or a literal, inerrantist type of the first order.  But I do have high regard for this sacred text, so much that I have read, studied, taught and preached from it for years.  While the stories in the television show bore some resemblance to the stories in beloved Good Book, the enactment of them was … well, to be nice … a bit of a departure.

I mean mutant teenage Ninja turtle warriors rescuing Lot and his family???  That was my thought, at least, when I saw the scenes of the family fleeing Sodom – a huge Black angel and a shorter Asian angel dressed in armor that looked like the Ninja turtles and hacking all the unbelievers to death with swords and judo style moves.  Gimme a break.  Fire and brimstone from above isn’t enough?  Besides, I don’t recall even an authoritative version such as the Living Bible saying anything about the angels having to fight their way out of Sodom.  That version declares “the angels …rushed them to safety outside the city.” (Genesis 19:14)

And the accents??  “You don't want people talking King James English,” said one of the people associated with the program, but they certainly speak the King’s English.”  British accents dominate (not surprisingly, I guess since many of the actors are British), but to say it’s off-putting is an understatement.

Then there is the actor’s appearance – English with bad Roman-esque hairdos (for those characters into sartorial grooming) and dirty faces.  Perhaps they didn’t have soap and water in Old Testament times.

The Bible is a powerful text.  Why, oh, why do entertainment types feel the need to soap-opera, action film it up?  I guess that’s what one should expect when this “version” is produced by husband-and-wife team of Roma Downey of “Touched by an Angel,” and Mark Burnett, of CBS’s “Survivor.”  Sigh.

I could only take about an hour of this nonsense.  I gave up and retired with a good book.  I’d suggest you skip watching “The Bible” and read it instead.  In the case of this mini-series (emphasis on “mini” in many ways), the book really is better than the movie.