God, Getting Lost, and A Hint of Irony... Nancy and I have just returned from a relaxing time at Bald Head Island (I know -- very appropriate considering my hairlessness) North Carolina. The return drive took a bit longer than it should as we traveled home via bookstore visits and workshop presentation in Wilmington, NC and then Johnstown, PA -- not exactly a direct route from Southport to Indianapolis.

The trip from Johnstown took longer than it needed because I got lost. Completely turned around. Just after doing a reading from Sacred Compass. The reading went well, the audience seemed engaged, and then, after chit cat and signing some books, it was off in the car. Nancy read the Mapquest directions and I followed those well read directions. Well, I thought I did. I must have done something wrong because I couldn't find the road that we were looking for -- and thought we were on. After a mile or so, I pulled out our road atlas (having declared Mapquest worthless) map and looked -- as long as I continued south on the road we were on, we'd run into the road we were looking for.
So south we continued -- right into the heart of downtown Johnstown and "Thunder in the Valley," a huge annual motorcycle event. ("Thunder" explained why I couldn't get a motel room in Johnstown -- here I'd thought it was all the Friends General Conference Quakers taking them up! Which didn't fit with my mental image of FGCers being frugal types.)
Everywhere I looked was a motorcycle, motorcycler, vendor, streets not being where they were supposed to be, and no Route 219 heading toward the interstate. Time was a passin' -- and I was frustrated. Instead of being ahead of schedule and almost to Sommerset, we were still in Johnstown and home was 7 hours and 43 minutes (according to Mapquest -- which I was cursing at this point) away.
Finally, Nancy spotted a sign that said "To 219" and up the ramp we went. It didn't make any sense -- why would we go north to find the road going south? And why were none of the roads where they were supposed to be? Finally, 10 miles later, came an exit for Route 219 -- 1/2 a block from where I originally turned on to the road the led to 219. How can that be, I wondered? As I merged into the swiftly moving 219 traffic, I glanced up at the mirror and noticed the compass embedded in it by thoughtful Toyota engineers. I was, and had been since we got on the road that said "To 219", going south. My mistake earlier was that, when I made the first turn in Johnstown, instead of heading south (like I thought I was), I turned north -- and had been moving away from my destination the entire time. That's why MapQuest and the road atlas were worthless -- I was reading them "upside down." All I needed to do to get going right was to look up at the compass. I would have seen clearly that I was going north, not south, and turned around.
This all reminded me, after I calmed down and quit feeling quite like an idiot, that it is precisely when I think -- no, not think, rather am CERTAIN!!!! -- that I'm going the right direction that I need most to check my compass. And in this case, I'm not talking about the Toyota one. I'm thinking about my sacred compass; the work of the Holy Spirit in my life. I may have checked the maps, the weather, the road conditions, and my own sense of direction -- but that may not be enough.
The car's compass was there. I just needed to consult it. When I did what the maps told me began to make sense and 7 hours and 52 minutes later (we made up some lost time) we arrived safely back at Ploughshares Farm. I checked the compass when we turned north into our long driveway, though, just to make sure!
-- Brent
Posted by Brent Bill at 1:01 PM 2 comments: 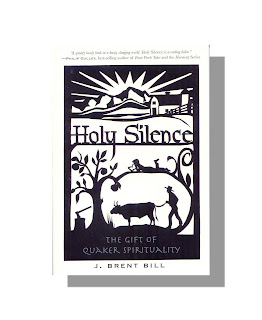 For the purpose of being alone and still before God, you might want to make a regular, non-negotiable place in your schedule. Maybe that’s early in the morning. It wouldn’t be for me. I hate getting up. But Nancy loves it. At home, when possible, she practices garden silence – sweet communion with God’s growing things. Rufus Jones said, “We find Him when we enjoy beauty.” Here's a reading on that subject from Holy Silence: The Gift of Quaker Spirituality.
If you'd like to subscribe to these podcasts via i-Tunes, sign up for itpc://feeds.feedburner.com/blogspot/bGkY
Download this episode: http://www.brentbill.com/02AlltheNews.mp3
Enjoy--
Brent
Posted by Brent Bill at 10:43 AM No comments:

The Newly Discovered History of Amish Rock and Roll 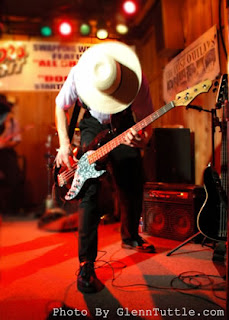 Not too long ago, my friend Carrie Newcomer and I were on tour together (well, actually, we appeared at one place together). While together, we put our heads together and discovered that we had both been working on the same research project -- the heretofore little known phenomenon of Amish rock and roll.
Now many people know Carrie as an outstanding singer/songwriter and me as a passable writer. But they don't know that we both PhD's in music ethnology from the Berlin Conservatory of Music (online, distance learning division) located in Berlin, North Dakota. And we have a special interest in historic peace church music (Quaker -- very, very, very quiet with few lyrics, for example).
The Amish are, of course, are loosely affiliated with the historic peace churches. And so we began looking into their music -- especially the music of the youth. What we found astounded us. That is that the Amish have had an amazing influence on American Rock and Roll.
Most of us know the Amish as a rather closed (to put it mildly) sect of pious buggy-driving believers and eschew electricity. They live in a strict society, under tight control of their family and close-knit community. But then there's "rumspringa." When they turn 16, Amish teenagers are allowed the freedom to explore the customs of the outside "English" world before deciding whether to join the Amish church for life or leave the community altogether.
During this period, many of their youth have formed clandestine rock and roll bands and have rocked forth with a wide range of songs. Many of these songs were discovered by "the English," given slightly different lyrical phrasing, and been recorded by rock and roll stars as diverse as "The Beach Boys," "The Doors," The Rolling Stones," and more.
While the reader may find that hard to believe, Carrie and I (prior to publishing our findings in a scholarly journal) are herewith listing some of our findings -- and inviting others to contribute songs they may have discovered in their listening.
"Amish Girls"
Well Mennonite girls are hip
I really dig those caps they wear
And der English girls with no caps at all
They knock me out with that short hair.
I wish they all could be Amish
I wish they all could be Amish
I wish they all could be Amish girls.
Music & Lyrics by Brian Yoder and Karl Bontrager

The High Price of High Octane 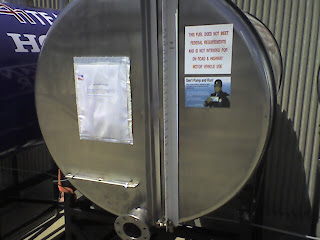 Well, it had to happen, I suppose. I paid over $4 per gallon for gasoline whilst doing book tour stuff in Chicago last week. Thank heavens I drive a hybrid. But the high price of fuel really hit me recently when my little Jewish brother, Rabbi Aaron, and I spent an afternoon at the Indianapolis Motor Speedway. It was a practice day for the (then) upcoming Indianapolis 500 ("The 92nd running of the greatest spectacle in racing"). Aaron and I wandered through "Gasoline Alley" -- the home of the racing teams' garages. We saw lots of drivers and cars and enjoyed the general hoop-la surrounding the event. We turned a corner to go back to the Rubicon Racing suite (yes, we were guests of somebody -- we're both too stingy to drop real money for tickets, pit passes, etc) for another round of hot dogs and sodas when I saw true evidence of the high price of fuel. There sat one of the shiny round gas tanks of the racing league and plastered firmly upon it (you have to look close) was a sticker with a picture of an Indianapolis State Police trooper and the warning " Don't Pump and Run!" 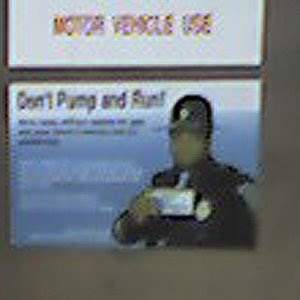 Well, that certainly explains why some of the pit stops took so long at this year's race -- Dixon, Andretti, Patrick, et al had to swipe their cards and sign the receipts!

Posted by Brent Bill at 1:38 PM No comments: