I agree with this reasoned defense by JP Sears against the need for tougher gun laws.

After all, the 2nd Amendment reads: "A well regulated Militia, being necessary to the security of a free State, the right of the people to keep and bear Arms, shall not be infringed."

The Las Vegas shooter only had 42 guns (23 in the hotel alone!!) along with a many loaded high-capacity magazines. Surely that's what the framers of the 2nd Amendment had in mind.

I cry "foul" to a study published by the American Journal of Medicine which says, "Compared to 22 other high-income nations, the United States' gun-related murder rate is 25 times higher. And, even though the United States' suicide rate is similar to other countries, the nation's gun-related suicide rate is eight times higher than other high-income countries."

Also our cities just aren't keeping up with other countries' gun deaths. 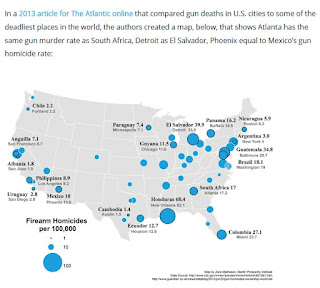 We need to try harder.

JP Sears is right -- we need more guns, not fewer, in more, not fewer, peoples' hands. Law enforcement officers cannot be trusted -- we must rise up and protect ourselves.

Watch out coyotes -- I'm in the market for an assault weapon. Or better yet -- a tank!

(PS Lest anybody be silly enough to quote any part of this post in defense of more weaponry or private arsenals or against gun control... it's called satire)
Posted by Brent Bill at 9:20 AM No comments: