"...He wasn't talking to the Roman soldiers who were Christian..." 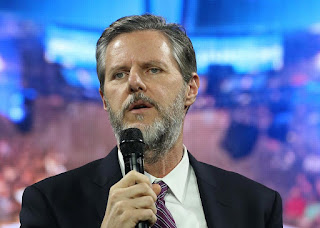 When I wandered down from my office to have lunch today, I heard something on CNN which was news to me.  Jerry Falwell, Jr was on that station responding to Pope Francis' questioning of whether Donald Trump was a Christian or not.  According to CNN:


Asked whether American Catholics should vote for Trump, Francis demurred.

"As far as what you said about whether I would advise to vote or not to vote, I am not going to get involved in that. I say only that this man is not Christian if he has said things like that."

The Pope appeared somewhat unaware of Trump's exact stance on illegal immigration, though, saying that he would give him "the benefit of the doubt" until he had heard exactly what the billionaire businessman had said.

"I say only that this man is not Christian if he has said things like that."

Jerry Falwell, Jr took exception to those remarks.  That's his right. I have no problem with that. What I have a problem with is what he said later in the interview.  He was trying to explain why Candidate Trump could be a Christian and have views the Pope considered departing from the teaching of Jesus.  My ears perked up when he explained, "When Jesus told his listeners to 'turn the other cheek,' he was not talking to the Roman soldiers who were Christian."

What???!!!  My mind was blown.  Now I get that I write books about being a bad Quaker ("Life Lessons from a Bad Quaker") but I'm a better historian and biblical scholar than that.  I mean, technically Falwell, Jr was right -- Jesus was not talking to the Roman soldiers who were Christian.

Second, according to reputable historical sources, there weren't any Roman soldiers who were Christian for almost 300 years after the resurrection. Christians were enemies of the state. You couldn't serve as a soldier and be a known traitor. And besides, since the Church then practiced the way of peace in the midst of terrible persecution, the Church elders didn't look kindly upon any of their members who wanted to be a Roman soldier.

But, to the casual viewer, Falwell dumped a load of unbiblical ... um... dung that sounded true. Especially to the viewer who assumes Jesus came and Christian kings and shepherds greeted him in his manger. Maybe accompanied by a few Christian Roman soldiers who were there only as gentle guardians and far from the imperialistic militarists there to crush an insubordinate people that I always perceived them as.

I fear for the 90,000 students at Liberty University who are getting a biblical education under the guidance of such a man. I fear even more for people who heard Falwell's words and understand them to be gospel truth.

Posted by Brent Bill at 7:23 PM No comments: