The Great Emergence -- Is Emerging 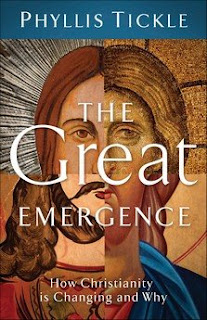 Well, it's drawing nigh, a least. Based on Phyllis Tickle's book of the same name, The Great Emergence will be a time of worship, discussion, dreaming, interaction, and thinking about the current state of and future possibilities for Christianity.

Tickle's thesis that the Great Emergence that is upon us is a once in a five hundred year event should, by itself, lead to lots of lively discussion and debate. After all, that's a pretty audacious assertion, to compare what it is happening in the Emergent movement to the Great Schism, the Great Reformation, and other "Great" motions and seismic changes throughout Christian history.
And so is her statement that "It is not unreasonable to assume that by the time the Great Emergence has reached maturity, about 60% of practicing American Christians will be emergent or some clear variant thereof."
That's a pretty heady prediction. And one that has huge ramifications for those of us who gather in congregations, work with congregations, and teach leaders of congregations. What does the Great Emergence mean for us?
I invite you to join the discussion by attending the Great Emergence. And, if you're a Friend, to come early and join in a discussion of what it means for Friends. I propose meeting at noon on Thursday the 4th, (I'll look for a place) for lunch and discussion.
If you're going, and interested in such a meeting, please let me know asap!
--Brent
Posted by Brent Bill at 8:34 AM No comments:

That was the headline I got on GoogleNews. So I checked it out and here's what I found --

It seems that a Quaker parrot in the Denver, CO area saved the life of a choking toddler when it began screaming and repeated the words "mama baby" over and over. The toddler's caregiver was able to respond to the warning and save the the 2-year-old's life.
The article goes one to say, "A babysitter's worst fear was brought to reality last week when 2-year-old Hannah, the little girl she was watching, began choking on her pop tart. However, the babysitter wasn't the one to notice the choking toddler. It was the family pet, Willie the Quaker parrot.
"While I was in the bathroom, Willie (the parrot) started screaming like I'd never heard him scream before and he started flapping his wings," said Meagan, the sitter who owns the bird.
"Then he started saying 'mama baby' over and over and over again until I came out and looked at Hannah and Hannah's face was turning blue because she was choking on her pop tart.
" The babysitter, Meagan, was able to perform the Heimlich and save the little girl. Hannah's mom, Samantha Kuusk, was reportedly very relieved and stated in an interview "I'm very grateful for the both of them because they both saved her."
Had it not been for the normally talkative bird's squawking and then yelling "mama baby" repeatedly, Meagan believes she might not have come out of the restroom in time to save Hannah who had already turned blue. "
One of the best instances of vocal ministry by a Quaker that I've ever heard of.
-- Brent
Posted by Brent Bill at 9:09 AM 1 comment:

I've been cheating. I admit it. I'm not proud of it, but there it is. I am a diabetic. I doubt that's news to any readers since if you've ever met me in person, I usually try to work it into conversation within the first few sentences. Philip Gulley, my good friend the FAMOUS writer (unlike me, the author of rare books -- rarely sold), says he's never heard me go three sentences without working it it.
Unlike many diabetics though, I rarely cheat. I follow my diet carefully, watch my blood sugars, and have weighed within 5 pounds of the same weight for the past 10 years. But then came Hallowe'en. And the dreaded candy.
I was gone when it came. In Cincinnati for the wonderful "Books by the Banks" celebration (if you live close, don't miss it next year. It's great.). When I came home though, there were all the left-over candies -- Reese's Peanut Butter Cups, Milky Ways, and... the dreaded "Dots."
I can easily take a pass on Reese's and Milky Ways. But not "Dots." They are so tiny and so yummy -- how much harm could they be? And so, slowly, ever so slowly, the teeny boxes have been disappearing from the basket and into my hot little hands. Each brightly colored Dot savored -- chewed into tiny pieces. I can make one of those tiny boxes (5 pieces) last for an hour.
Which made me think some about the nature of temptation. It's easy for me to avoid the big chocolate bars. The pieces of pie or cake. A package of cookies. But a Dot or two? What harm is there? A minor flirtation with sugar. How deadly could that be?
I am happy to report, that it's not been deadly at 'tall. I'm not writing this from intensive care or anything. My blood glucose levels are barely out of their ordinary range. Still, are Dots the beginning of a slippery slope? Especially for a compulsive personality like mine?
I hope not.
I pray not.
"Deliver us from temptation."
Well, only one more box left anyhoo. So deliver me from temptation -- tomorrow.
-- Brent
Posted by Brent Bill at 7:22 PM No comments:

Email ThisBlogThis!Share to TwitterShare to FacebookShare to Pinterest
Labels: temptation 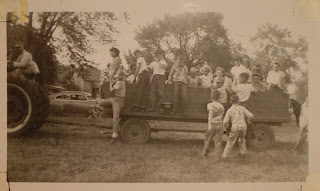 There was a quarter moon outside our ten cent town two evenings ago when I arrived home. A good portion of the family had assembled for a bonfire -- and then they wanted to go on a hayride. So being the really good guy I am, I went to the barn, dropped the log-splitter off the tractor, and fire Mr. Deere up to go get the hay wagon. The sun was starting to set and it was a nice bouncy ride over the recently picked bean field and across the road back to Nancy's nephew's house where the wagon was. In a stroke of luck (not driving skill), actually backed the tractor perfectly to the wagon so that I all I had to do was pick up the tongue, slide it over the draw bar, drop the pin in and... viola' (as the French farmers say), I was good to go.

Arriving back at the bonfire, the sun had set, the embers were glowing, and hot dogs were roasting. After a truly unhealthy meal, it was time to set out on the hayride. To be lit or not lit (the tractor -- not me) was the question. Not much moon, some starlight, but there's just something about warning lights that takes the fun out of a hayride. So, I thought I'd try doing it in the dark -- steering my way around the field (and keeping out of the woods) by what little light God had provided.
It was enough. In fact, I was amazed how much light there was once we pulled away from the fire and my eyes adjusted to the night. I could easily pick out the woods from the field and indeed saw variations of soil in the field that I had never noticed before in the daylight. The sandier soil shone different in the starlight than did the more clay-laden and the loamy (all words that didn't mean much to me just a few years ago). It was even easy to pick out Zeus the big black dog running back and forth in front of the tractor or zipping off into the woods in pursuit of Ebony our black cat.
It reminded me, that when things seem pretty dark, we often are given more light than we realize at first glance. We -- I -- tend to curse the darkness instead of stepping out into the light that is there. Driving that night in the dark reminded me that God gives me the light I need to make my way. Regardless of my life being in the daytime or feeling beset by nighttime. The secret to successfully navigating by the little light the other night was to give my eyes time to adjust to their perceived lack of light -- and to go slow. I geared the tractor down and moved along at a speed appropriate to the conditions.
It was a reminder I needed.
-- Brent
Posted by Brent Bill at 11:48 AM No comments: