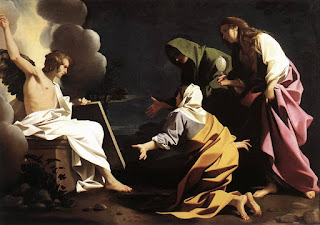 It’s hard to imagine the despair they felt that morning as they made their way to the tomb in pre-dawn darkness. Their hearts were breaking. The one they loved was dead. Worse than dead – murdered, murdered by those who couldn’t accept him and his message. Executed on a cross as an outlaw, he died between two outlaws. Most of his followers went into hiding, figuring they might be next.

They came out in that blackest hour before daybreak. Their grief was tearing them apart, yet love compelled them to go on.

When they get there they see that the stone has been rolled away from the front of the tomb. What now? Tentatively they enter the open tomb. There they saw a young man dressed in a white robe sitting there. The Bible, with its typical understatement says “and they were alarmed.”

Well, who wouldn’t be? The events of those past few days would overwhelm most of us. Imagine having someone you loved unjustly accused, summarily executed and you go to the cemetery to find the grave opened, the casket lid removed and a young man in white sitting on edge of the open grave, feet dangling into the abyss. Who among us wouldn’t be alarmed?

The young man says “Don't be alarmed. You are looking for Jesus the Nazarene, who was crucified. He has risen! He is not here. See the place where they laid him.”

They don’t find this pronouncement all that comforting. “Trembling and bewildered,” the gospel writer relates, “the women went out and fled from the tomb.”

The story of Easter and the trip to the empty tomb is a familiar one. It has become so familiar and we cease to be moved by the wonder of it all. After all, Christians have been telling and re-telling this story for around two thousand years.

But the Easter event is more than a tale, full of pathos and high drama. The Easter event is the basis for our faith. Paul says “if Christ has not been raised, then our preaching is in vain and your faith is in vain. … in that case we had better cast off this unreal Christianity as soon as possible and go back to those who have chosen the watchword, which seems so openly cheerful and yet is so full of hopeless resignation: ‘Let us eat, drink and be merry, for tomorrow we die.’”

In those words, Paul lays it out. Either the man in white’s statement that “Jesus the Nazarene, who was crucified … has risen! He is not here.” is true or Christianity is false. If it is not true, then we might as well all leave and go home to our families and dinners and find more fruitful pursuits than this with which to fill our Sunday mornings.

But if it is true, then what? Then we live, too. Not just later, when this mortal life is ended, but here and now with purpose and meaning that we’ll not have if there was no resurrection.

You see, the story of the crucified God who did not stay dead and came to the garden to be with his friends that morning, is for us today. It is a message of eternal hope. I cannot explain the resurrection to you – how it happened in terms of scientific knowledge or historical documentation. For the Easter event is not about science or history. It is about faith and promise. Jurgen Moltmann, in his book The Crucified God, says “The resurrection of Jesus from the dead by God does not speak the “language of facts,” but only the language of faith and hope, that is, the “language of promise.” Easter is about “Jesus the Nazarene, who was crucified. He has risen! He is not here.”

“He has risen! He is not here.” is true about that rock hewn tomb in which he was laid. But, at another level, “He is not here” is not true – for he is here – in this room this morning. In our hearts and in the very air. “For where two or three come together in my name, there am I with them.” He is the presence in our midst. Because “He has risen! He is here and here (point to heart)” He lives today. He lives so that we might have purpose, meaning and hope in our lives. He lives to bring us back to the right place, our place in the family of God.


A woman with shoulders bowed only since Friday
steps deep into death’s lair.
Stupified by guilt or sorrow or not caring,
the town had been silent as she passed.
Behind the hedges insensible cyclamen
and violets drink life from the dawn,
giving their moisture back to the sky.
They too should have perished with Him,
blasted to very root hairs
tenacious in the ground. Gather
some for Him and with the aloes
make an ointment for His bloodied brow.

Oh joy! Her bitter myrrh
had become obsolete at daybreak.
Through ground and rock,
sky, sea, and stars,
He bursts His putrid casing
and confronts the universe!

She folds the linen, taking it home
to wash from it the stench of death,
joyfully she shakes it out in the forever sunshine.

An Easter meditation I gave at West Newton Friends Meeting this morning (3/27/16)
Posted by Brent Bill at 11:39 AM No comments: