A Modest Proposal: Part 8 For the Revitalization of the Quaker Message in the United States 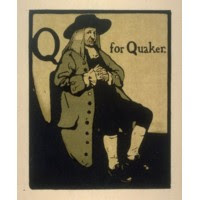 This is the final installment (I think) in my modest proposal. There are lots of specific proposals that I could make (about outreach, use of new media, and more) but they are really outside the scope of this series, which was to paint some big ideas with fairly broad strokes and to invoke the art critic in people who care about the future of the Friends message and get them to respond.

So, to that end, one more probably improbable proposal. Let's change our name.
YIKES!!! He can't be serious???
Ah, but he is. While I dearly love "Religious Society of Friends" and am even proud to be a humble Quaker, I'm not sure that either really help us share our message.
I'll concede to keeping "Quaker." It has a homey, friendly appeal -- thanks in no small part to a certain breakfast cereal conglomerate and a nostalgic view that folks outside our Society have when they hear that word.
But Religious Society of Friends says ... um... nothing to people outside of our little group. So let's dump it in favor of some simpler, more descriptive phrase.
How about "Friends of Jesus?"
OMG!! Jesus?
Well, as I recall, we took the name Friends because a certain Biblical figure uttered some words that we liked -- "Ye are my friends, if ye do whatsoever I command you. Henceforth I call you not servants; for the servant knoweth not what his lord doeth: but I have called you friends; for all things that I have heard of my Father I have made known unto you." (John 15:14 & 15, KJV).
And who was the Biblical personage who uttered those words? Hmmm ... Jesus!
Now, before I am accused of being totally ignorant of the breadth of Friends theological thinking and language and some Friends dislike of the name (if not the person) of Jesus, I know that this will stick in some Quaker craws. It does in mine just a bit -- especially during those times that Jesus words bug me. And I'm pretty sure some members of my family won't like it. But, it does get back to the intent behind the early Friends calling themselves Friends. They were -- or at least hoped to be -- the friends of Jesus.
Think of how it would simplify how we identify ourselves to outsiders -- or those we hope to attract? What would it be like to invite someone to visit the Friends of Jesus in Plainfield instead of Plainfield Friends Church? Or Plainville Friends of Jesus instead of Plainville Friends Meeting?
Sounds sort of fresh and new and Biblical and ... um... George Fox-y, doesn't it?
I think it could have a special appeal to those folks who say they like Jesus and his message, but just aren't too sure about the church.
Of course, changing the name will not make any difference if the Friends of Jesus are just the same old church/meeting dressed up in a new moniker. But the name itself is an invitation -- and a challenge. Do we wish to live up to the potential of the original intent of our name? Do we, individually and corporately, want to be the friends of Jesus? To live and move and have our being in the same Spirit that inspired the women and men who founded our movement? To do whatsoever God commands us? To live our faith daily within a community of belief and seeking God, held in a soulful tension of learning and growing?
Ah, it's only a name.
Or is it?
-- Brent

A Modest Proposal: Part 7 For the Revitalization of the Quaker Message in the United States

A year or so ago, after an address I was giving to and for Quakers, during the question and answer period a woman asked me if I thought their Yearly Meeting would ever reach agreement on a new version of Faith and Practice. I said, "Tell me more" and she went on to explain that they had been struggling with coming up with a new version for a number of years and were not seemingly able to agree on a new edition.

After hearing that, I said that I doubted that they would reach agreement unless they returned to an older model of Faith and Practice -- one that more resembled the 1967 Christian faith and practice in the experience of the Society of Friends of London Yearly Meeting than it does the Book of Discipline of the United Methodist Church or the Presbyterian Book of Order.

The "old" Christian Faith and Practice is filled with, as the title implies, the experiences of Friends regarding important faith issues and their practice -- God, the Bible, worship, family life, and more. It is instructional in an illuminating -- not dictatorial -- way.

But many books of Faith and Practice are becoming imitations of other Protestant denominations books of discipline -- which I think indicates that the creeping denominationalism has moved more into many of our Yearly Meetings becoming Protestant judicatories like synods or presbyteries or dioceses. According to one definition, a judicatory "is an administrative structure or organization found in a religious denominations between the local congregation and the ... [body] which is [a] higher court. ... the judicatory can have decisive authority over a local church, can offer standing for clergy members, ..."

I am not advocating anarchy -- we Friends say we are about Gospel order. I agree. And there is much written in the Bible and other places about what that means and how to follow it. What I am against is a institutionalism that is dedicated to keeping institutions alive -- and to get rid of anyone (or meeting or group) that disagrees with the institutional hierarchy.

So part 7 of my modest proposal is that Yearly Meetings and other Friends bodies (whether they are centuries old, decades old or relatively new) stop and do serious examination of their purpose and programs. By that, Friends (and the institutions) need to ask things such as

Further, I think these larger institutions and their staff and constituencies need to look at every program and staff position and ask the question "How does this fit with our mission -- our raison d'être?" We shouldnt' be asking "Is it good or worthy?" Many programs and staff people may be good and worthy, but they may also detract from the institution's primary purposes. In which case the organization then does not do the ministry for which it was created.

I fear we spend too much time staffing boards and committees that may no longer be needed -- simply because Faith and Practice tells us that we need X number of representatives from each Meeting, Quarterly Meeting or whatever to serve on such and such a board. And we hear reports and do some business and rarely ask, "Is this what God is calling us to at this time?"

Of course, there are many nuances to the three things above. They can be parsed a number of ways depending upon the institution's answer to some queries

That's one way to look at how early Quakerism came into being. As a fresh way to communicate a Gospel that had been boxed in by institutionalism, rites, rituals, clergy, and books. Fox and the early Friends sprung up in reaction to and against that. What would they think of us today?