Baseless: My Search for Secrets in the Ruins of the Freedom of Information Act by Nicholson Baker 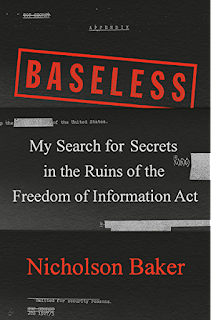 Right off I have to confess that Nicholson Baker is one of my favorite writers, both of fiction and non-fiction. I first encountered his writing when I read the astonishing Human Smoke: The Beginnings of World War II, The End of Civilization. The research that went into the making of that book and how he constructed it amazed me and drew me in. I've given numerous copies of it to friends. Traveling Sprinkler is my favorite novel of his (so far).

So when I heard Baseless was going to be released, I pre-ordered a copy. And I looked forward to its arrival. I wasn't disappointed.

Like Human Smoke, the research here is mind-blowing -- Baker's dedication to getting to the heart of the matter and keeping it all in an order that makes an eminently readable book. That is no easy task -- to take pages upon pages after request after request via the Freedom of Information Act, many of those pages heavily redacted, but still filled with clues or hints that needed to followed, and written in government intelligence and military jargon and distill them into clear, clean, precise prose. Further, Baker makes it both compelling and interesting.

One way he keeps it interesting is by interweaving bits of his daily life into the narrative. Organized chronologically beginning March 9 through May 18, 2019, he presents a daily chronicle of his life as he writes this book (I was disappointed that there was no entry for my May birth date, though). That personalizes this material in a way that makes the information he presents from his research both less and more horrible at the same time.

The title for this work comes from "Project Baseless," a project begun in the early 50s by the Pentagon to develop and achieve deliverability by the US Air Force chemical and biological weapons. As Baker's research reveals, this was not just an idea, but a project where millions of dollars were spent on such weapons and how to deliver them on targets such as Korea, China, the USSR, and more (including in Central America!). Of course, the cost was more than just financial -- there was also a huge animal and human costs. Thousands, if not millions, of mice, rats, cats, dogs, monkeys and more were sacrificed in testing the viability of these weapons. Some humans may have been, too, as wind drift and poor delivery systems scattered spores and the like places they weren't supposed to go. Other humans, notably the scientists and other workers on this project, suffered all sorts of issues -- physical, emotional, and mental. More than a handful committed suicide.

The horror is staggering. Made all the more so by my reading it during the current pandemic. The power of a virus is an amazing, terrifying thing. And to think that my government (supposedly for the people and by the people) secretly developed and deployed such weapons is amazing and terrifying.

And the silliness of the people involved, too, is amazing and terrifying. The list of participants is a who's who of US Cold War warriors. And they play this, at times, as if it's a game. The code names and acronyms remind of my early 60s childhood games with the guys in my neighborhood -- or a Monty Python skit gone terribly wrong.  REDSOX and AEROSOL are relatively benign, if silly, but then there's BGFIEND, KMWAAHOOLAND, DYCLAVIER, PLAYDON, and on and on. It would be funny if the destruction of whole countries crops and other food sources, resulting in mass civilian starvation, wasn't the goal.

I usually read Nicholson Baker books fairly quickly. By the end of the week they arrive, I've finished them. Not so with Baseless. The writing was beautiful and eloquent, but the material was not to be rushed through. I needed time to absorb the horror of what I was learning before moving on to even more horror. And I admit, the more read, the more ashamed I was that our country participated in this projects, with support from presidents of both parties. It makes me wonder what else I don't know that my country has done in my name ... and with my money, even.