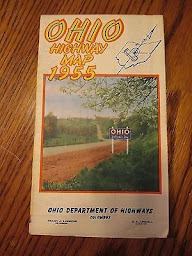 A young deer leapt out onto the two lane road that stretched out before me. I applied the pickup truck brakes, slowly bringing the truck to a complete stop. The deer was lit with mid-morning sun that was behind me. It just looked at me. I looked down the road -- no cars were were coming from the other direction. I checked my mirror. No vehicles were approaching from behind. I inched forward, willing the little deer to move. It did, so that it was right in front of me. And then another appeared from the same direction the first had come and the both scampered across the road and down the sloping roadside into the woods. I eased off the brake and resumed my meandering drive through west Central Ohio.

I hadn't been to my home state since January. On March 1, Nancy had a stroke and then shortly after that the pandemic shut everything down. Now things were well enough all the way around that I could make a quick trip and visit some family and enjoy being back in Ohio. Mys sister Linda is selling her house and had my mother's small secretary desk and rocking chair from the home we grew up in on Eureka Avenue in Columbus, Ohio for me to bring back to Indiana. So I gassed up my little GMC and headed east on the interstate early on Friday morning.

After a nice lunch with Linda and my sister Kathleen and her husband Paul, I loaded the truck with the desk and rocker, along with some boxes of tools that were Dad's, and some other miscellaneous memorabilia. Then Linda, Kathleen, Paul, and I retired to Linda's screen porch and chatted for hours. Sister Julie called from her home on top of a mesa in Colorado. It was a wonderful time of memories and family.

At 8:15 Saturday morning, I fired up the Canyon and headed out. It was a crisp, cool almost autumn morn, so I decided to take backroads at least part of the way home. I turned onto Orange Road, which when I was a kid on the Hilltop area of Columbus seemed terribly far away when we would travel up to Orange Road Friends Church for Quarterly Meeting or other services. It's all of twenty miles. Orange Road now is lined by houses and tall trees and was very peaceful with the shade covering the road. Then north on Liberty Road, west on Herriott, south on Ohio 42, southwest on 161, southwest on 4. "I know Ohio like the back of my hand," to quote a line from a song by Over the Rhine.

I reveled in the feel of familiar roads under the truck tires. Roads I'd traveled over many times since I was child. Towns, small and smaller. New California. Plain City. Irwin. Mechanicsburg. Winding byways, gentle hills, woods, farmsteads, soybeans starting their change from deep green to yellow, cornstalks likewise losing their vibrant green. The sun taking on a more autumnal slant, lengthening the shadows. And me, tooling along in my truck, my payload of family in the bed.

I looked in the mirror and saw the rocker, on its side, safely bungeed in the back. I thought of all us kids, and grandkids, and great-grandkids who had rocked in it. How Kathleen had stood on one of the runners and broken it and how careful craftsman hands had crafted an identical runner that has now been a part of the rocker for so long you can't tell (well, we kids can because we remember) which is original and which is the "new" one. I wondered who in the family would have it and Mom's desk after me.

I also thought of our old MG that Dad and Mom had driven over some of those roads. Just out for a ride. It was resting in my garage in Indiana -- a 1955 (the same age as the MG) Ohio road map in the glove box. The roads I was driving were all on that map. Not so for the interstates I traveled over yesterday.

As I drove, the sun rising, the pale fullish moon fading in the western sky, the country smells wafting in through the slightly open window, I was at peace. Grateful. For young deer who caused me to stop. For family that embraces me physically and emotionally. For roads to wander and enjoy. For being a person of this place. A Midwestern man.

Email ThisBlogThis!Share to TwitterShare to FacebookShare to Pinterest
Labels: family, memories, Ohio, over the rhine, roads

I loved reading this. So poignant and picturesque. I, too, love peaceful, quiet moments and country roads which you described so eloquently.

Brought up memories of my Ohio home. Especially wonderful in the fall. Thanks.