Next week I turn 70. I can now fully live into the grumpy, cranky old man persona I've been cultivating the past few years.

One of the joys of aging, as someone with diabetes, high blood pressure, chronic heart failure, and who knows what else, is regular testing of my blood, urine, and ... um... bowel movements.

The latter is what resulted in this cranky old man chronicle. 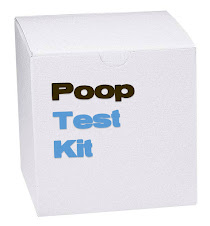 Now I've been having such tests for years. No big deal. But this year my health insurance company suggested a specific brand named test. It advertises on television a lot, with a happy little talking box as it's spokesperson. My primary care physician agreed so I said fine.

The happy little box, which isn't at all discrete or that small arrived by UPS the other day. Now I don't mind talking about a lot of things, but one thing I don't usually talk about is my bowel health. And I don't need the UPS guy knowing about it.

I spied the box on my way out to do some chores and brought it inside and set it on the screen porch table. I forgot it was there. Then the great-grandkids and their mother and grandmother showed up. "Pawpaw got present?" inquired one. "Something wrong?" asked my daughter.

Sigh, again. "Nope, just regular test." I took the box into my bedroom for later use.

The next day I opened the box. As I said, I've been have similar tests for years. This package had instructional booklet after instruction booklet about everything from shipping the "sample" back to how to do the test. The latter booklet had helpful illustrations about how to "collect" the "sample."

Now I've been collecting samples in a container of various sorts (potty chair, toilet, outhouse, etc) for about 67 years. I think I've got that part down.

The instruction book had lots of other illustrations related to my bodily functions that I didn't need.

Then the aggravation really started. First came phone calls from the testing company. I rarely answer calls from numbers I don't recognize or for which there is no caller ID. So they went to voice mail. A cheery voice told me things like how I'd be receiving a test, how to find instructions for the test, and so on. They came once or twice a day. Then I got an email ... or twenty (it seemed like). Then a letter in the mail.

Most of those came after I had "collected" my "sample" and boxed it according to directions and took it to the UPS store for return to the lab. It made my day to have another UPS guy know my business.

I expect more phone calls, emails, letters even after the results are anal(pun intended)lyzed and sent to the doctor. I feel like I'm the lab's new best friend. Not really a friend I need.

Well, now that I've vented, I feel moved to go take care of some business. So I'll leave you with, not a sample, but this poem by John Updike:

Though most of them aren’t much to write about—
mere squibs and nubs, like half-smoked pale cigars,
the tint and stink recalling Tuesday’s meal,
the texture loose and soon dissolved—this one,
struck off in solitude one afternoon
(that prairie stretch before the late light fails)
with no distinct sensation, sweet or pained,
of special inspiration or release,
was yet a masterpiece: a flawless coil,
unbroken, in the bowl, as if a potter
who worked in this most frail, least grateful clay
had set himself to shape a topaz vase.
O spiral perfection, not seashell nor
stardust, how can I keep you? With this poem.