A Loving Story: Myra and Howard 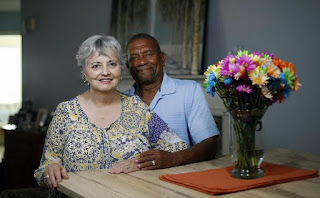 Yesterday, whilst Facebooking, I was alerted to a wonderful, yet bittersweet, story. Two of my school friends (Myra and I went from first grade through high school together) from the West High School class of 1969 were featured in The Columbus Dispatch (my hometown paper).

The article tells the story of Howard Foster and Myra Clark and how racism drove them apart 45 years ago. It's a wrenching story -- but ultimately one of the power of love. It's a tale of how, as Quaker William Penn said, "Force subdues, but love gains." 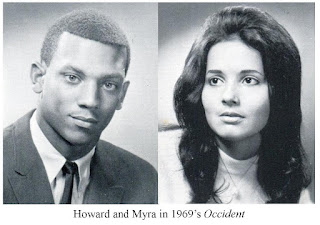 people with most of their lives ahead of them. As the article notes, parts of our time at West were rocked at times by racial violence and demonstrations. On February 24, 1969, 74 West High students were arrested for refusing to end a sit-in. They were protesting the administration's refusal to allow a public address announcement of the fourth anniversary of Malcom X's assassination.

The sit-in was in the gym. Hardly disrupting anything. But the administration called the police and had students arrested. Which sparked even more racial tension than we'd experienced before.

I thought that move was stupid then. I think it was even dumber today. And it was just sad. It is still sad.

Little did Myra and Howard probably know that this was a harbinger of their future.

What is also sad is the racism Howard faced following high school. Those experiences were the reason he broke up with Myra -- “Society wasn’t going to let us be together and she be happy. ... She’d get tired of the stares; I just thought it was unfair to her,” Howard says in the article. “Her happiness was the most important thing.”

What's most sad -- and frustrating -- about this is that in many ways the issues faced by Howard are still with us today. While some things are better, we who live in the United States have a long way to go healing our racial divide. And when I say "we" I mean the white majority. White like me.

I've been thinking a lot about that after reading Howard and Myra's story. And how we can't ask those who are oppressed to solve the issue for us. Then, ironically, I opened my email this morning and found this poem as today's "Poem-A Day":

when you’re done unpinning yourself
from the wall, please give hope

About writing this poem, Liebegott says "I often think of the expression, ‘You have to work twice as hard to be viewed half as good,’ used for women and people of color. Marginalized people are often asked to be the patient educators to non-marginalized people. I think this poem wrestles with the intrinsic unfairness of that."

Yet, Howard and Myra, despite the "intrinsic unfairness of that," continue to be "patient educators" to us all. They remind me to be ever vigilant and active in working against the entrenched racism in contemporary American society. They do give hope.

Earlier in this piece, I quoted William Penn. As I read Myra and Howard's story, I was reminded by another Penn quote: "Never marry but for love; but see that thou lovest what is lovely." Myra and Howard saw what is lovely in each other in high school -- and today. May we see what they saw -- and may it call us to work for a world where love rules and "gains."

Thank you, Howard and Myra.

Very sad that this happen l knew Howard from being on the football team with him. They both didn’t deserve the treatment placed upon them